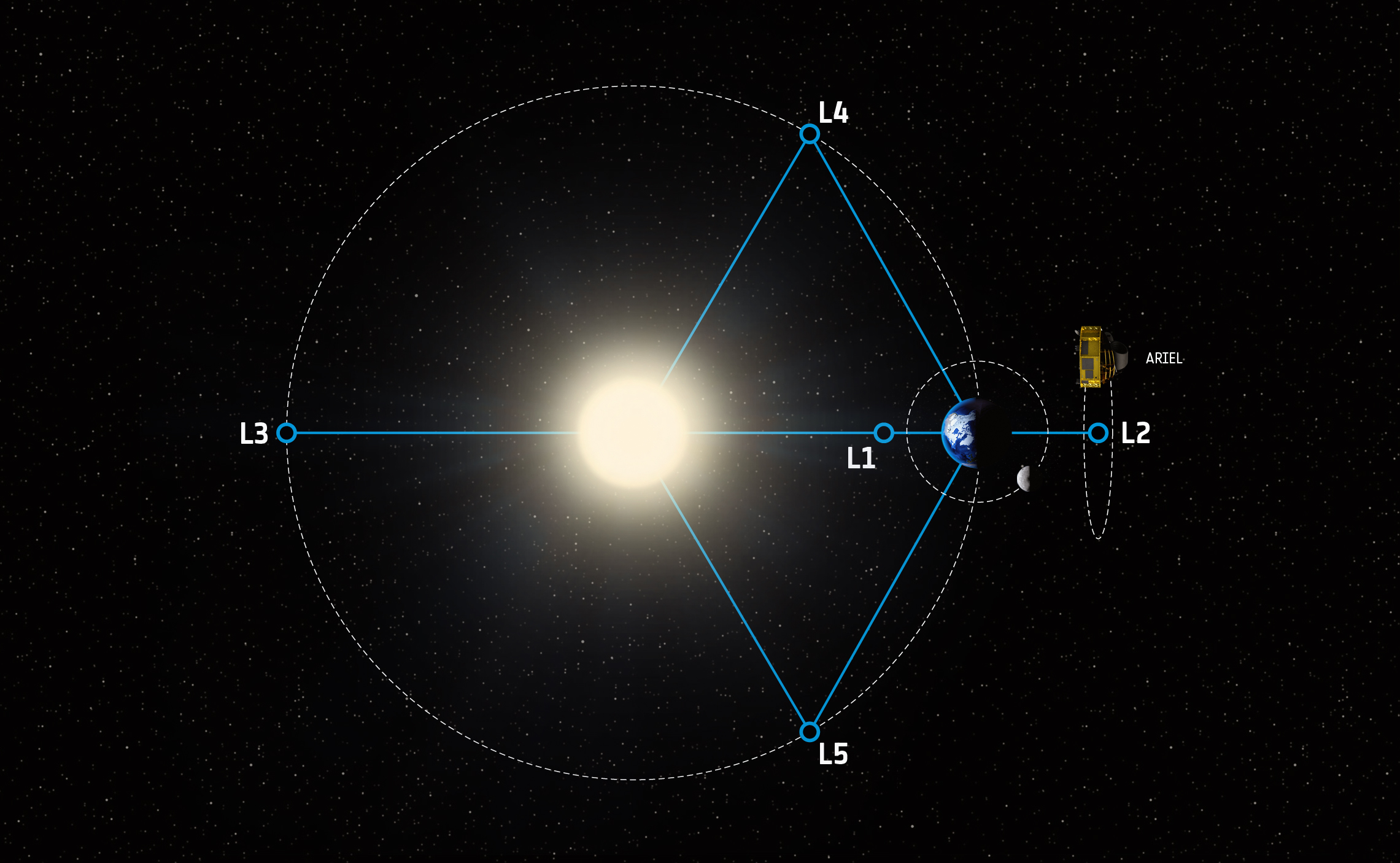 The European Space Agency (ESA) and Airbus have signed a contract to move forward with the design and construction of the Atmospheric Remote-sensing Infrared Exoplanet Large-survey (Ariel). Work on the Ariel payload module by the Ariel Mission Consortium is already well underway and the two teams will be working closely together to deliver the mission for launch in 2029.

“With this milestone for the Ariel mission we celebrate the continuation of the outstanding relationship with our industry partners to keep Europe at the forefront of excellence in the field of exoplanet research well into the next decade and beyond,” says Günther Hasinger, ESA’s Director of Science.

The contract was celebrated between the two parties with a small ceremony at ESA headquarters in Paris on 6 December.

Airbus will lead the European industrial consortium building the satellite bus. The Toulouse facility in France will be the main site for designing, manufacturing and integrating the spacecraft elements, while Airbus Stevenage in the UK will lead the engineering of the avionics, radio frequency communication and electrical design of the platform.

The mission’s payload module, which includes a one metre-class cryogenic telescope and associated science instruments, is provided by the Ariel Mission Consortium. The consortium comprises more than 50 institutes from 17 European countries. NASA also contributes to the payload. In 2021 the Consortium completed ten reviews covering each of the payload subsystems to ensure that the teams understand what needs to be built and that the preliminary designs for each part are feasible and, crucially, will work together correctly.

“The international Ariel Mission Consortium been making fantastic progress with the payload. We are looking forward to working closely with Airbus to ensure the payload works perfectly on board the spacecraft. Together we will be enabling amazing new discoveries about planets beyond our Solar System” said Paul Eccleston, Ariel Mission Consortium Project Manager and RAL Space Chief Engineer.

Artificial intelligence (AI) experts from around the world have been competing for the opportunity to help astronomers to explore planets in our local galactic neighbourhood.

The European Space Agency’s Ariel telescope, which launches in 2029, will study the atmospheres of around 1000 planets outside our solar system, known as exoplanets.

Observing faint signals to measure the make-up of exoplanet atmospheres is incredibly challenging and is made even more so by other signals the instrument may pick up. The effect of star activity, like sun spots, and even the noise of the spacecraft itself can obscure the information scientists receive from Ariel.

The Ariel Machine Learning Data Challenge, sponsored by Spaceflux Ltd, was set to harness the expertise of the artificial intelligence community to help disentangle this unwanted noise from the light filtering through exoplanet atmospheres. Over 110 teams from around the world participated with 35 teams submitting viable solutions. The teams represented a mix of academia and AI companies.

The competition winners, ML Analytics, an artificial intelligence company in Portugal, and a team from TU Dortmund University in Germany were able to achieve highly accurate solutions for even the most difficult to observe planets.

To continue reading the full press release, follow this link:
Winners announced for the machine vs stellar and instrument noise data challenge

The European Space Agency (ESA) have formally adopted Ariel, the first mission dedicated to study the nature, formation and evolution of exoplanets.

– Ariel has passed major feasibility reviews and has been formally adopted into the program of future missions for implementation.
– It will survey about 1000 planets outside our solar system during its lifetime.
– Ariel will unveil the nature, formation and evolution of a large and assorted sample of planets around different types of stars in our galaxy.

Ariel, a mission to make the first large-scale survey of exoplanet atmospheres, has launched a global competition series to find innovative solutions for the interpretation and analysis of exoplanet data. The first Ariel Data Challenge invites professional and amateur data scientists around the world to use Machine Learning (ML) to remove noise from exoplanet observations caused by starspots and by instrumentation.

Ariel, a mission to answer fundamental questions about how planetary systems form and evolve, has been selected by the European Space Agency (ESA) as its next medium-class science mission, due for launch in 2028. During a 4-year mission, Ariel will observe 1000 planets orbiting distant stars and make the first large-scale survey of the chemistry of exoplanet atmospheres. ESA’s Science Programme Committee announced the selection of Ariel from three candidate missions on 21st March 2018.

Image:
Ariel will be placed in orbit around the Lagrange Point 2 (L2), a gravitational balance point 1.5 million kilometres beyond the Earth’s orbit around the Sun. Image Credit: ESA/STFC RAL Space/UCL/Europlanet-Science Office

An ambitious European mission is being planned to answer fundamental questions about how planetary systems form and evolve. Ariel will investigate the atmospheres of several hundreds planets orbiting distant stars. It is one of three candidate missions selected last month by the European Space Agency (ESA) for its next medium class science mission, due for launch in 2026. The Ariel mission concept has been developed by a consortium of more than 50 institutes from 12 countries, including UK, France, Italy, Germany, the Netherlands, Poland, Spain, Belgium, Austria, Denmark, Ireland, Portugal. The mission will be presented today at the Pathways 2015 conference in Bern, Switzerland, by Ariel’s Principal Investigator, Prof Giovanna Tinetti of UCL.

“The essential nature of exoplanets is still something of a mystery to us: despite finding nearly 2000 exoplanets we haven’t yet found any discernible pattern linking the presence, size or orbital parameters of a planet to what its parent star is like,” said Tinetti. “If we are going to answer questions, such as how is the chemistry of a planet linked to the environment in which it forms, or is its birth and evolution driven by its host star, we need to study a statistically large sample of exoplanets. This is what Ariel is designed to do.”

During its 4-year mission, Ariel will observe over 500 exoplanets ranging from Jupiter- and Neptune-size down to super-Earths in a wide variety of environments. While some of the planets known by the time of Ariel’s launch may be habitable, the main focus of the mission will be on exotic, hot planets in orbits very close to their star.

Hot exoplanets represent a natural laboratory in which to study the chemistry and formation of exoplanets. In cooler planets, different gases separate out through condensation and sinking into distinct cloud layers. The scorching heat experienced by hot exoplanets overrides these processes and keeps all molecular species circulating throughout the atmosphere.

Ariel will have a meter-class mirror to collect infrared light from distant star systems and to focus it to a spectrometer. This will spread the light into a ‘rainbow’ and extract the chemical fingerprints of gases in the planets’ atmospheres, as the planet passes in front or behind the star.

Ariel will be placed in orbit at Lagrange Point 2 (L2), a gravitational balance point beyond the Earth’s orbit, where the spacecraft is shielded from the Sun and has a clear view of the whole night sky. This will maximise its options for observing exoplanets discovered previously by other missions.

Ariel’s Project Manager, Paul Eccleston, said “STFC RAL Space is excited to be involved in such an ambitious mission, and one which is crucial to the study of how planets form and evolve. Working with such a large consortium means that we will be able to draw on world leading expertise from around Europe to get the very best results for of the mission.”